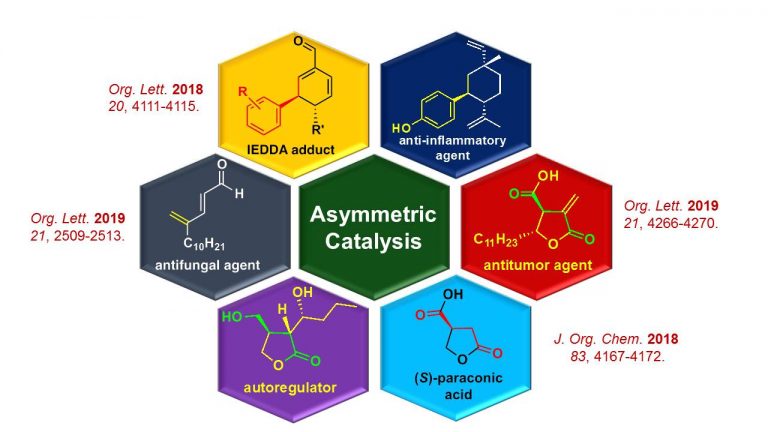 Our group is actively pursuing research in the following topics.

Chiral secondary amine catalyzes the reaction of aldehydes via multiple reactive (iminium, enamine, diiminium, dienamine, triiminium, trienamine, etc…) intermediates, due to which, the formation of an isomeric mixture of products are observed. Our group focuses on the development of new catalytic methodologies to achieve excellent selectivities (regio- as well as stereo-control) in the vinylogous γ-functionalization of α,β-unsaturated aldehydes and δ-functionalization of α,β,γ,δ-unsaturated aldehydes.

Inspired by the use arginine side chain in many enzymatic reactions, chiral guanidines and amidines have been developed for asymmetric base catalysis. On the other hand, chiral guanidinium and amidinium Bronsted acids are effectively utilized as double hydrogen bond donor catalysts for various organic transformations. Achieving high stereoselectivities and expanding the reaction scope are continued to be very challenging in this area of research. Our group is developing novel double hydrogen-bond donor organocatalysts with different catalophores to meet such challenges.

We devise a short and efficient route for the synthesis of bioactive natural products with the use of asymmetric catalytic methodologies developed in our laboratory. We also synthesize several unnatural small molecules to develop inhibitors for targeted diseases in collaboration with biological science researchers.